The Indian Premier League is just around the corner which means another month of bombastic action both on and off the field. It has hard to be believe that the IPL was first introduced in 2008. The event has exceeded all expectations generating huge revenue for BCCI and provided quite a number of light hearted moments for the fans as well.

We have gone through quite a few of these and have narrowed down 7 IPL moments that are always good for a chuckle. Here are the funniest IPL moments ever recorded on camera. 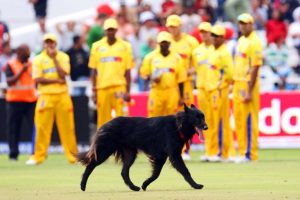 Starting off the list of IPL’s funniest moments is an incident that occurred during the match between Mumbai Indians and the Chennai Super Kings. It was the opening game of the second IPL and the match was being held in Cape Town, South Africa.

Mumbai Indians were batting when all of a sudden the play was interrupted due to a dog wandering onto the field. Ground staff along with a rather acrobatic Super Kings official tried to persuade the dog to leave but all efforts fell in vain.

It was only after the dog was tempted with some food that the canine decided to leave the field. The match was held for a total of 10 minutes. 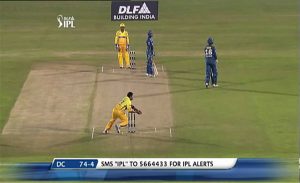 The next funny IPL moment comes courtesy of the Chennai Super Kings and Mumbai Indians once again. This moment however is different from the previous one as it actually involves the players.

In what can only be described as a ‘comedy of errors’, it started off with Dwayne Smith playing a shot for a quick single. Suresh Raina pounced on the ball and threw it with laser guided precision to Shadab Jakti for a run-out chance. Jakti was unable to gather the ball cleanly which allowed Smith to go for another single.

This created another chance for a run out which Jakti once again failed to capitalise on.

Players are often guilty of providing hilarious moments on the field but this time the on field umpires joined in the act as well. Following a strategic break in a match between Royal Challengers Bangalore and Kings XI Punjab, play was unable to get underway because no one could seem to locate the cricket ball.

Kings XI Skipper Ravi Ashwin approached the Indian Umpire C Shamshuddin who was unaware of the whereabouts of the ball as well. Second Umpire Bruce Oxenford joined in and eventually the fourth Umpire was called in to provide a box full of new balls. Use of technology proved beneficial yet once again as TV replays showed Shamshuddin putting the ball in his pocket just before the players had gone for the break.

Once the mystery of the ball had been solved, normal IPL services were resumed. Watch the entire incident by clicking HERE. 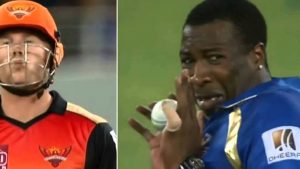 West Indian players are known for their on field antics and this moment certainly does not disappoint. In a match between Sun Risers Hyderabad and Mumbai Indians, things were getting heated between pace bowler Kieron Pollard and batsman David Warner.

After a dot ball, Pollard walked up to Warner to give him a piece of his mind and ended up receiving a form of sledging not particularly associated with Aussies. Instead of getting a quick jibe, Pollard received a flying kiss from Warner and his reactions caught on television set the IPL on fire. 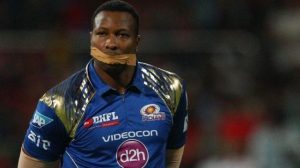 Pollard making the news yet once again. In a match between Mumbai Indians and Royal Challengers Bangalore, Pollard in his typical fashion was trying his level best to rile up fellow West Indian, Chris Gayle. Gayle was not amused and reached out to the umpires regarding Pollard’s behaviour.

As a precaution, the umpires gave Pollard a warning and asked him to maintain distance from the batsman. Pollard was having none of it and decided to literally tape up his mouth. He would peel the edge of the tape only when talking to his team mates.

Naturally the cameras caught this and frequently showed the taped up Pollard on the big screen much to the amusement of the local crowd.

What seemed like a standard victory lap turned into more of a dance contest in IPL 2011. After lifting the IPL trophy for the second time in a row, Bollinger and Bravo were seen dancing to the beat of the drummers. They were joined by other team mates as they soaked up the praise and adulation of the crowd while throwing shapes to some high-octane Tamil drumming. 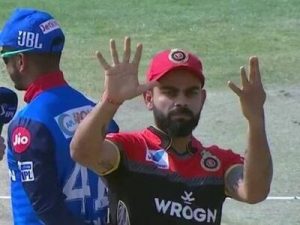 Virat Kohli is known for many things – a superb batsman, calculating captain with a crazy work ethic. However, he also possesses the worst luck in IPL cricket when it comes to the toss.

In the 12th match of IPL 2019, Kohli arrived at the field only to lose the toss yet once again. Cameras picked up Kohli gesturing to his team mates about losing the toss for the ninth team as Anjum Chopra was talking to the Delhi Capitals Captain Shreyas Iyer.

Cricket is considered a gentleman’s game. The aws of cricket are known for taking a backseat when certain actions of the players are conducted in the spirit of the game. This concept was thrown out the window in a game between Kings XI Punjab vs Rajasthan Royals.

Ashwin sensing that Butler was leaving the crease on the non-strikers end decided to remove the bails upon which the batsman was given out. Such an act is referred to as ‘mankading’ and the term gets its name after Indian bowler, Vinoo Mankad. Simply put it is when a bowler dismisses a batsman at the non-striker’s end by removing the bails before bowling. If the non-striker is found outside of the crease, then the batsman is given out.

Ashwin attempted to repeat this on Shikhar Dhawan in a match between Delhi Capitals and Kings XI Punjab. Dhawan was well inside his crease and his displayed his displeasure by bending down on one knee. Hilarity ensued when Dhawan performed a bizarre dance just as

Ashwin was about to deliver the following ball. Whereas Ashwin failed to see the lighter side of Dhawan’s actions, the commentators and crowed were left in stitches. You can watch Dhawan’s dance moves HERE.

A self-proclaimed boss of the universe and destroyer of bowling line ups all over, Gayle is also responsible for providing some of the funniest IPL moments.

Starting off with the tamest incident, the Caribbean cricketer was captured in a video that saw him performing the bhangra. Celebrating his side’s win he was also was joined by captain Kohli and Mandeep Singh.

Not content with having a stellar cricket career, Gayle can also be seen practicing his football skills in a match against Sunrisers Hyderabad. Chasing after a ball full speed, Gayle tried his best to prevent a boundary but instead used his foot to further help the ball to the ropes.

While not intentional, the moment was captured clearly by the cameras but to the happiness of the crowd and commentators alike. Maybe best to stick to cricket 😊

In another incident of Gayle being himself, the Universe Boss can be seen chasing the Spidercam and making funny faces while doing so. This was also the same match in which he had kicked the ball to the boundary.

Last on our list of funny IPL moments, is a moment that occurred in a match between Bangalore and Delhi. The match was called off due to rain but that did not prevent Gayle from having a bit of fun.

As the rain poured down, the players rushed towards the pavilion with Yuviraj giving Gayle a gentle push. Gayle returned the favour by chasing Yuvi down with his bat.

At least the pair were able to give some form of entertainment to the disappointed crowd.