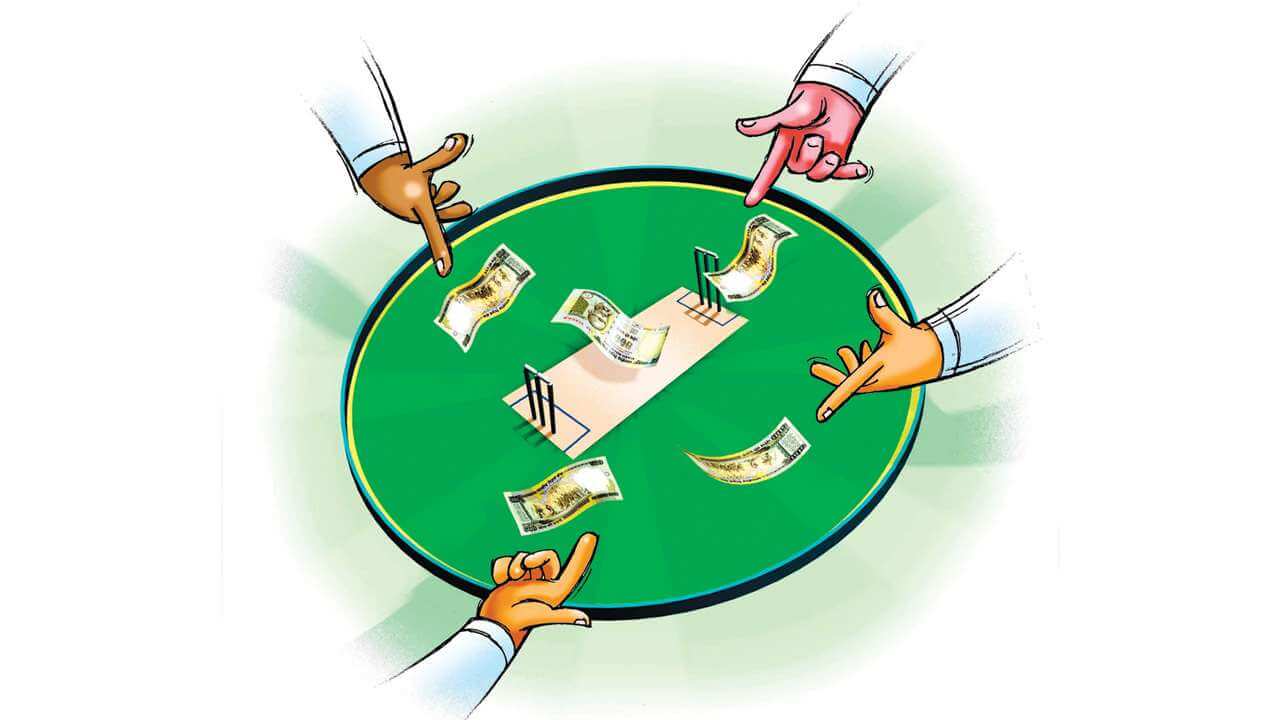 Another month and another cricket series has begun, this time between India and world cup runners up, New Zealand. The series has already gotten off to a poor start for the visiting team who lost the first test quite comprehensively.

While the Indian national team comes up with new strategies for the second test, the bookmakers residing in Kolkata, Mumbai and Delhi will have descended upon smaller towns such as Jamnagar, Rajkot and Nashik.

The aim of the relocation is simple – to acquire new SIM cards and open up new accounts in the names of their patrons. These practices have become customary as the shift to the smaller towns is undertaken for one main purpose and that is to evade the law enforcement agencies. Bookmakers with considerable income and clout also have the option of evading authorities by travelling abroad, mostly Dubai.

Once the IPL 2020 comes around, the cat and mouse game will begin again and will keep on going on till the government reaches to the logical conclusion of legalising sports betting. Mumbai police has reached the very limit when it comes to underground bookmakers. In the words of a senior Mumbai police officer “This (relocation and deception) makes it difficult to nab them”. The police officer who requested anonymity also believes that legalisation and regulation of the sports betting has now become essential.

This year alone, a three-member panel appointed by the Supreme Court came to the same conclusion and recommended legalising cricket betting in India. The Lodha panel, named after chairman RN Lodha investigated the match fixing scandal of 2013. The aim of the panel was to investigate and wrong doings and to recommend ways to improve the working of the Board of Control for Cricket in India (BCCI).

Their recommendation to BCCI with regards to cricket betting is to have an in built mechanism to ensure that administrators and players do not bet on matches. Legalising betting is a sentiment shared by former cricketers, law enforcement agencies, lawyers and politicians connected with cricket.

Sports Betting and its Effect on Poverty?

The legalisation according to some cricketers will have both positive and negative repercussions. Kirti Azad, former cricketer and BJP MP had the following to say regarding the subject matter “By legalising cricket betting, the government would receive more taxes. At the same time, legalised betting may attract a lot of poor people”. Many people argue that with two thirds of the Indian population already living in poverty, is legalisation the right away forward?

To further this point, authorities in Kerala discovered that the lottery tickets were bought mainly by the poor. Those of a middle class or affluent disposition did not purchase the tickets at all. As per a former head of the lotteries department in Kerala, this pattern reflects the social taboos associated with gambling and betting in India.

The Public Gambling Act of 1867 generally frowns upon gambling and prohibits gambling in ‘games of chance’. Games of skill whereby the bettors have adequate knowledge of the sport and the participants faces no such restriction. This allows horse racing for the only sport in India to be fully legal when it comes to sports betting. Thus betting on other sports such as cricket is deemed illegal, immoral and is practiced only behind closed doors.

Peek Inside the World of Cricket Betting

The Economic Times were able get a peek into the world of betting by talking to a Mumbai based punter. As per the punter the bets can start as low as 5000 Rupees and can go as high as one desires. Bets are normally laid after the toss as that is when the bettors get to know the squad that will be participating in the match. This makes sense as the Indian team with Virat Kohli has a greater chance of winning than it does without him. The most preferred bet according to the punter is placed on the end result of the match. This could be placing a bet on the winner of the match or the end score a team scores batting first.

The punter further went onto explain the difference between ‘spot’ and ‘session’ bets.

Spot bets refer can be referred to as real time betting and involves placing bets on a series of actions such as runs scored in an over, number of wides or no balls and wickets taken in an over. Session bets are easier to place and usually cover a larger span of time e.g number of wickets taken between twenty overs.

Up to 50 mobile phones are used to connect with the punters. The numbers are refreshed after every big series. The bookmakers will keep 10 numbers aside to get in touch with the rich punters while the remainder of the 40 will be ringing throughout the cricket match. All bets are settled thirty minutes after the match has come to a close with transactions made via the ‘Hawala Route’.

This means that if a punter in Mumbai has won 10,000 rupees and a similar amount is lost by another person in the same area then the loser is required to pay off the winner. Punters are only able to get in touch with the bookmakers via the way of at least two references. Therefore, defaulting is a rare occurrence. In the event that a punter is unable to pay the bet, the references are called upon to settle the balance. There is little wonder why the police have been unable to curb illegal betting given that it takes place in such an efficient closed door system.

According to the Federation of Indian Chambers of Commerce & Industry (FICCI), the betting market in India is worth at least Rs 3,00,000 crore. It will come as no surprise to you that cricket has an 80% share of that. If the BCCI and government are able to act on the recommendation of the Lodha committee, the revenue generation will be close to 20,000 crores!

Jaydev Mody, chairman of Delta Corp that operate two casinos in Goa has the following to say regarding legalising of betting “I think betting volumes will only be there in cricket (than any other sport), so it makes sense to legalise cricket betting at the first level”.

The first real challenge of legalising sports betting is to encourage the states to come forth with their proposals. Sikkim is a classic case of how states themselves can run into difficulties even when it comes to online gambling. Ranjana Adhikari, a lawyer at Nishith Desai Associates is of the opinion that once the states have agreed to legalise betting they then need to tackle the Information Technology Act 2000.

Adhikari had the following to say “We have seen in the case of Sikkim that the overlap of regulatory powers has hit the plans of operators to provide the operations on a pan India basis through internet. To offer sports betting online, the Centre would also need to amend the ‘Intermediary Guidelines’ which currently prohibits ISPs from allowing gambling content”.

The next step is to successfully tackle the issue of immorality that is associated with gambling activities. Gambling is considered a vice because of its addictive nature and its ability to not only harm the punter but also affect those associated as well.

Rahul Luther, founder of Hyderabad-based Hope Trust had the following to say “Problem gamblers will always gamble, irrespective of its legality or illegality. Therefore, the better option is to legalise gambling, monitor and regulate it”

To curb the flow of black money, the next challenge is to make all betting related transactions cashless. The punters should be required to use either e-wallets or other payment options to place their bets. Next step is to set a reasonable tax rate on the winnings. The government needs to look no further than the steep tax rates and club commissions race clubs charge on the punters. Royal Western India Turf Club, the most popular horse racing club chargers 30% as commission from winnings.

It is no wonder that illegal betting on horse racing has gone up by nearly 50% in the last three years. Jaydev Mody has the following to say on the matter of taxation “If the government keeps taxes at 4–5% levels, compliance with the law would be as high as 95%.”

Lessons from Across the Pond

It would also be beneficial for the Indian government to look into the regulated gambling markets of UK and Sweden and take inspiration on how to bring legalisation to India. UK a country where gambling is considered a normal part of society has taken strict measures to not only combat problem gambling but to also create laws to support legalise it.

The bookmakers in the UK are required to conduct extensive KYC procedures on their players as well reporting on any suspicious betting activity. Failure to do so has led to the imposition of heavy fines over the years. A total of £19.6 million pounds were paid in 2018 by gambling firms who had failed to stop money laundering and protect problem gambling.

If the Indian government is to succeed than it needs to install similar age-vetting systems to prevent underage gambling. Furthermore dedicated departments must be set up with the local gambling firms to identify patters or either abuse or problem gambling. Immediate steps must be taken to ensure that both activities are prevented or curbed as soon as they occur.

Adhikari had the following to say “In foreign countries, sophisticated technologies are used to address many of these issues, especially fraud detection. Specialised units must be put in place, like UK’s Sports Betting Intelligence Unit, to assist the enforcement authorities to effectively implement the law.”

While there are many challenges that lie ahead for legalising gambling, India must act now to stop underground gambling that breeds further problems and regulate the activity once and for all.

Title: The Long Road to Legalising Sports Betting in India